welcome to the genderfluid carrd !! 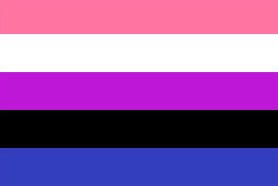 a place where i'm trying to do smth for my community

first of all, what does genderfluid mean?
genderfluid is an identity in which other identities such as binary identity, biggenus and triggen identity can be located, concentrating on both binary and null identity. genderfluid establishes imprecise and variable transition periods in which it's identified as one gender and other periods in which it's identified as another. genderfluid isn't determined by the presence of certain sexual characteristics or sexual orientation, but by a constant search for conformity in gender identity. the same meaning of the word, genderfluid, is understood to mean that gender flows. which means that depending on how that person feels identified at that moment, they will use the pronouns that they want.

do they mean the same?
no, so stop making them invisible.

what pronouns should i use with a genderfluid person?
great question. you can use any pronoun, but first you have to ask them what pronouns to use. each person is different, and each genderfluid is different; or in other words, they use different pronouns. they can choose the pronouns they want to use for that time period. sometimes they identify with she/her, sometimes with he/him, sometimes with they/them and sometimes with other pronouns. they can be identified as female, male, as all genders or as a non-binary. there are people who like to identify with certain pronouns always. for example, someone may choose to be called she/him, or he/they, or she/they/he, or he/xe, etc. it looks a bit complicated but actually is not. so, in conclusion ask the pronouns.

a while ago i found a carrd explaining why we all have to have our pronouns in our bios of our social media, from people belonging to the lgbtq+ community to cishet people. and i also made a thread (in spanish) where i explain basic things about pronouns in general. you can find them here:

all members of the lgbtq+ community need to be visible, respected, supported and loved. STOP ENCOURAGING HATE AND RESPECT THE PRONOUNS! if you don't know that person's pronouns, ask them. don't use the pronouns that you suppose are correct because most of the time you can be wrong and offensive. so please ask them and normalize that! all of you are valid, all of us are valid. genderfluid people exists. nonbinary people exists. and the others gender identities that i didn't mention, there are also exists.
we are here and we are real.
we aren't bullshit.

made by robin, a genderfluid and biromantic 15 year old.

i hope this has helped u understand more about this part of the lgbtq+ community !!
and sorry if i made a mistake in the info that i'm sharing, just like u, i'm also learning. but if u have any questions or suggestions u can contact me by tapping here and i'll do my best to give u a well-argued answer ♡

remember to drink water and wear a mask, stay safe !!
thx for reading :^)